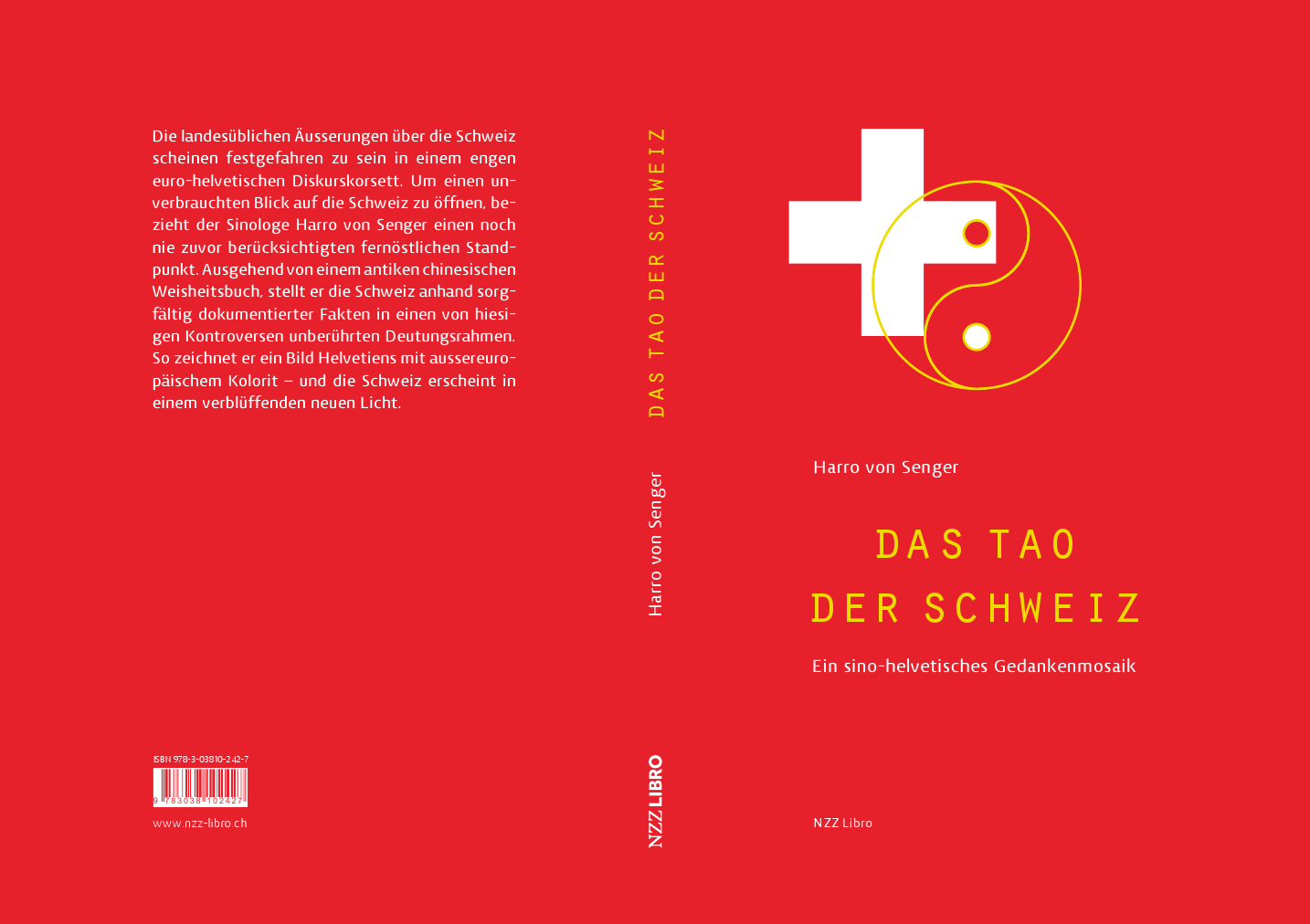 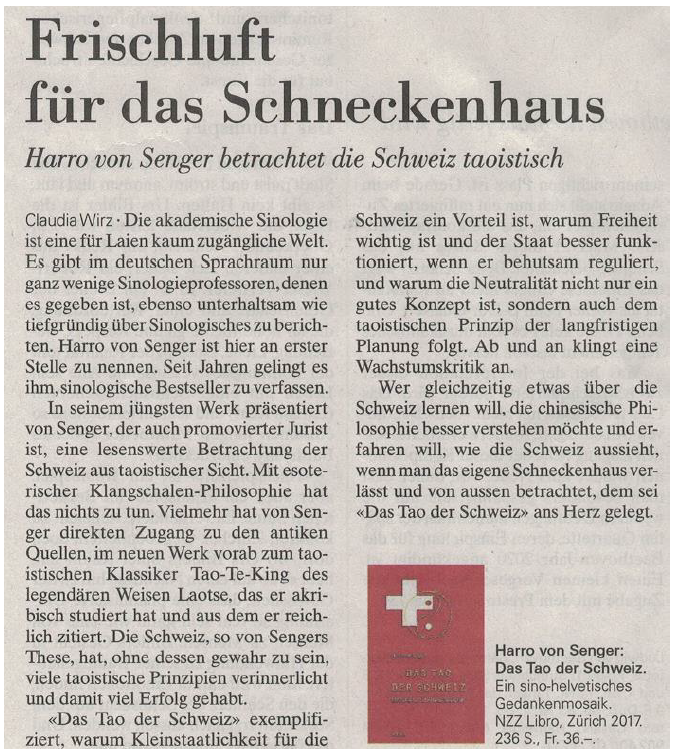 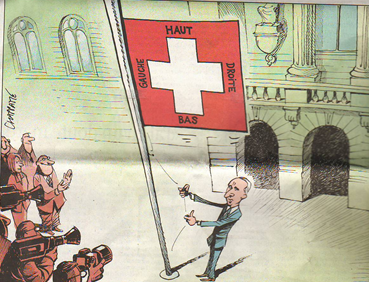 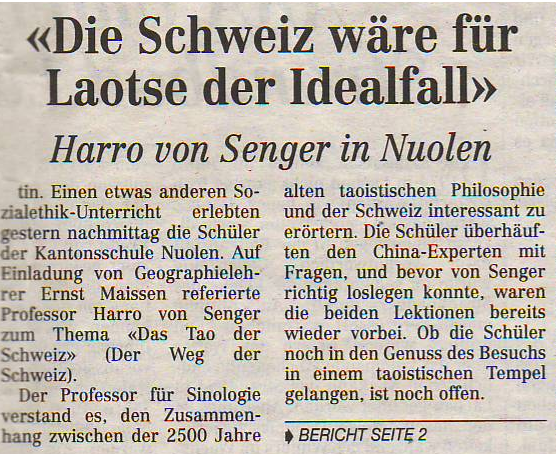 How Switzerland adopted the wisdom of China

Is there any country in the West that has earned huge success by putting ancient Chinese wisdom into governance and use? Probably Switzerland has done so, though in an unconscious way.

Starting in the 1990s, Swiss Sinologist Harro von Senger planned to decode his country's governance by referring to the ancient classic writings of legendary philosopher Lao Tzu, whose life is often dated to about 2,500 years ago.

Von Senger read intensively and buried himself in writing in his native German language in recent years. The book, Das Tao der Schweiz (The Tao of Switzerland), consisting of six chapters and about 70 pages of notes and references, made its debut in early May through the renowned Swiss publishing house Neue Zurcher Zeitung.

"Switzerland has basically realized Lao Tzu's ideal of governing a small country," says von Senger, who works at the Swiss Institute of Comparative Law in Lausanne, during a recent interview with China Daily.

Sitting on the first floor of the Barenrestaurant in his hometown, about an hour's train ride from Zurich, von Senger points at the Benedictine abbey through the window, saying he obtained eight years of middle school education there.

During that time, von Senger studied Latin for eight years, ancient Greek for six, French for seven and English for two.

After entering the University of Zurich in the 1970s, von Senger started to show great interest in Chinese language, and he wrote a doctoral thesis on the legal history of sales contracts in China.

But soon he shifted to the more than 80 sayings of Lao Tzu, whom he quoted within each chapter, using more than 1,000 references to illustrate links between Swiss success and China's ancient thoughts.

"It is a successful country, and behind its success lies the profound thoughts of Lao Tzu," von Senger says in fluent Mandarin.

Switzerland, of course, did not consciously adopt the ideals of Lao Tzu, but its success can be explained by examining the profound thoughts of Lao Tzu.

"Let there be a little country without many people." This is a line from the 80th chapter of Lao Tzu's work Dao De Jing. With a population of fewer than 9 million, Switzerland is the kind of country Lao Tzu dreamed of in size, according to von Senger.

"We are small and weak," von Senger says of his country. "These are good things for us, as we are not considered dangerous by other countries."

In addition, von Senger says Switzerland has also practiced the thoughts of another famous thinker Chuang Tzu - also known as Zhuangzi - who lived in the same era as Lao Tzu. Both shaped the essence of Taoism. 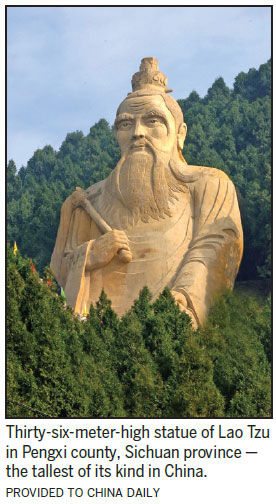 He cites the example of the Swiss Army, which he says could be considered to be the most successful one in the world because it has never been defeated, yet it never killed a single foreigner, in more than 200 years.

"Thanks to our Taoist-like policy of neutrality - which makes Switzerland 'useless' for any foreign power - and also thanks to good luck, the Swiss Amy has finally achieved big success," he says.

But he further emphasized that his country's "uselessness" is actually useful for hosting international organizations in dozens of fields and helping offer platforms for solving conflicts. In this way it contributes to global peace and prosperity, he says.

All these link to another important part of Taoism, which is MoulÃ¼e. von Senger says this thought has not been properly expressed in the West's languages. For example, one American scholar, who is said to be "one of the US government's leading China experts", translates moulÃ¼e as "deceptive strategy", which is very superficial, he says.

So he coined the English word supra-planning, which he says is superior to the "strategic thinking" considered in the West to be the highest level of planning.

"Sometimes, we need to coin a word to call attention to a unique phenomenon of another civilization," von Senger says.

He says supra-planning, or moulÃ¼e, is a broad-based art of planning only developed in China. He explains moulÃ¼e by using the yinyang symbol. The yang part refers to laws, regulations, customs and routine. But the yin part refers to hidden ways to solve problems and requires wisdom and creativity.

Von Senger, who was born in 1944 and studied at Peking University in the 1970s, is an industrious scholar. Since his studies in Beijing from 1975 to 1977, he has regularly read Chinese-language newspapers such as People's Daily and Guangming Daily. His books on Chinese moulÃ¼e have been published in 15 languages.

In addition to the yin-yang peculiarity of supra-planning, von Senger says its other feature is long-term thinking. He says nowadays, China's leadership has proposed the two centenary goals, to double the 2010 GDP and per capita income of the Chinese people, thus completing the building of a moderately prosperous society by 2020; and to build a prosperous, strong, democratic, culturally advanced and harmonious modern socialist country and realize the great renewal of the Chinese nation by the middle of the century.

The public debate on the two goals didn't become popular in China until 2011, but he has already written about it in his book Moulue, which was published in German in 2008. It is so far the only Western book on this topic.

He produced an article that was published in Neue Zürcher Zeitung - an influential German-language newspaper in Switzerland-in 1985.

"This is an article I had written on the goals of 2049," says von Senger, adding that China had already discussed such a long-term goal in the 1980s, and it aimed to be a developed country then.

He says having a long-range goal is a dominating feature of supraplanning, but Western strategic thinking can't match it. Normally, Western strategies - for instance, the Lisbon Strategy, an economic strategy launched in March 2000 by the European Union - lasted only 10 years.

Still, his country is an exception. "Switzerland has also had long-term thinking, which is about its neutral position," he says.